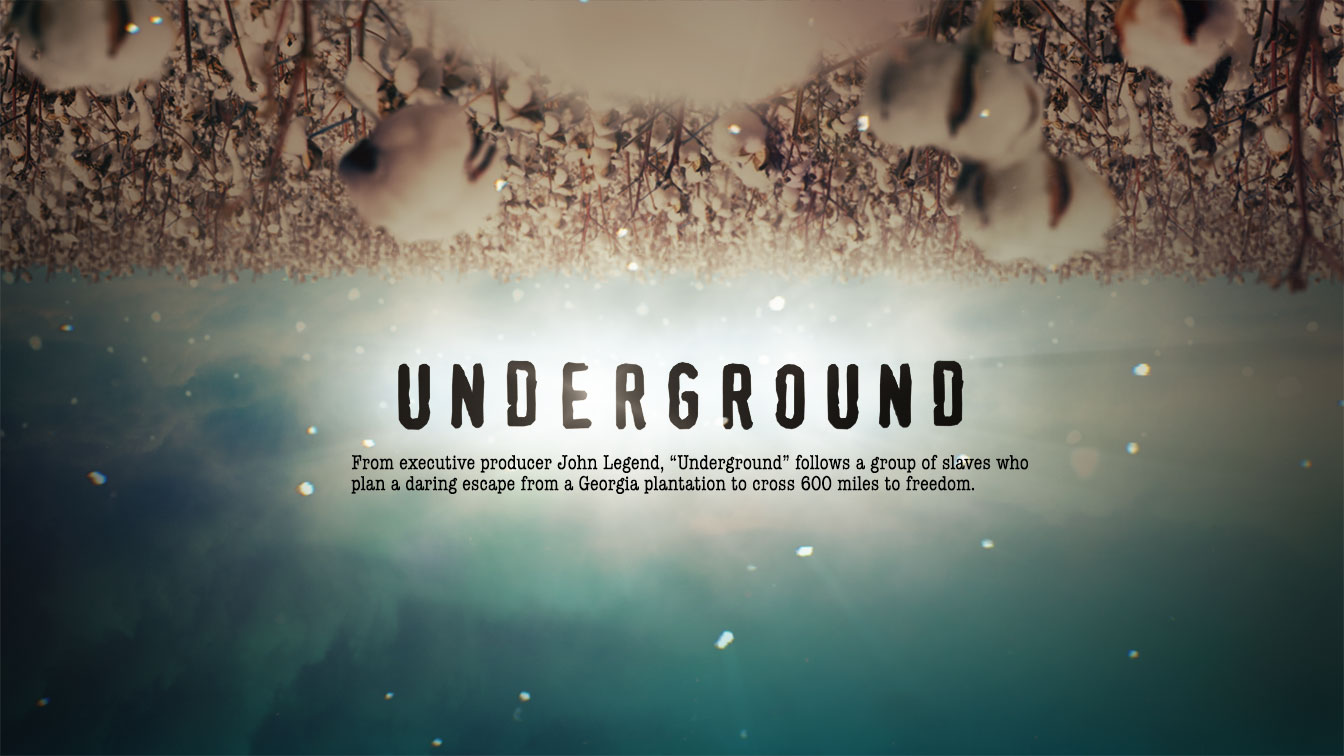 Underground is a new show created by Misha Green and Joe Pokaski, and produced by the likes of John Legend, Mike Jackson and several other big names. With such dynamic and creative contributors, Underground has created high expectations from its onset. Yet, it falls short of one’s expectation. Stories of slavery have turned into a trite concept in 2016. It lacks any original depth that could otherwise make this show powerful. Underground has the opportunity to meaningfully engage and educate its audience, however it loses its substance in a commercialized effort to entertain and create a faux “prison break” thriller theme to the Underground Railroad.

The opening scene cuts straight to the chase – no pun intended. It starts with a black slave, Noah (Aldis Hodge), running through the woods. The camera shots twirl and twist, matching the urgency of the runaway. Noah’s panic is timed perfectly to Kanye West’s Black Skinhead. While the content of the song is relevant to the current situation, the harsh juxtaposition of the contemporary track with the muted cinematography and the historical context of the antebellum South is unpalatable and frankly, cheesy. The soundtrack of Underground continuously displays this stark contrast of modern music set to the mood of pre-Civil War era. A prime example of how the show has lost substance in a vain attempt to entertain rather than take the time to create a classic piece. If there is a great need for contemporary music to appeal to a more mainstream audience, may I humbly suggest the works of Sam Cooke, Nina Simone, etc. who have a bit of the ol’ Negro spirituals in their vocals to better capture the essence of the story.

Underground has an opportunity to explore the psychological, social, and political ramifications of slavery in a prolific manner. The characters are strong – albeit one-dimensional. The protagonist, Noah, is a just another angry Black man with “fire in his eyes”, as he is continuously described. A rather disappointing moment in the plot is when he risks a near perfect escape plan for a women. As if we don’t see the stereotype of hypersexual Black men making terrible decisions just for some yams. The enslaved overseer, Cato, is simply an Uncle Tom driven by his selfish motives. Zeke is loyal, big brute without a sliver of intelligence to his name and his actions are largely animalistic, particularly when he breaks wagons with his bare hands and fights off five men on his own. Rosalyn is the tragic mulatto, more so a tragedy because her beauty is recognized solely because of her white half. Black female protagonists are rather lacking in this film, thus there is no room to create dynamic personalities for Black woman. The only fascinating character is August Pullman, a tortured slave catcher who plays by his own rules. A saving grace for this show is the strength of the slaves. Rather than remaining victims, we see black slaves as strong, willing to fight back by forming their own plan to escape.

Overall, the direction of the show leaves much to be desired, but it does hold plenty of potential. Certain aspects – the soundtrack, lack of a strong objective – do take away from the strength of the show, characters, and overall captivating design of the plot. If executed correctly, Underground can be up to par with the likes of “Roots”. What’s the saying? “Those who don’t know their history are doomed to repeat its mistakes.” With race relations in the United States becoming more tense than its ever been in the past ten years, articulating Black history – that is American history – correctly is crucial so we were are not doomed to repeat our mistakes.

Final Verdict: I’ll give it a few more episodes to impress me. Word on the street is, the first few episodes is caught up in setting up a premise.