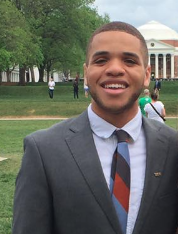 He was just a young guy,
Some would call him adventurous
He was on his way to school
He looked dangerous.
See, he was in school to become a lawyer,
And he was great at community leading
He was a dreamer like Martin
They said he was resisting.
Resisting the chains forged by society
He was going to rise above the strife.
Make it big and bring his people with him
The cop feared for his life.
The cop feared he would be successful,
“What if he was another King?”
Bringing people together to enact change
He reached for something.
He looked dangerous,
He was resisting,
The cop feared for his life
He reached for something.
Same old song and dance
And the excuses are all the same.
Black man shot, cop acquitted,
All that changes are the names.
When we protest to incite change,
We hear the pen is mightier than the sword
But when we write to do the same
Every single suggestion is ignored.
So if actions speak louder than words
I hear society loud and clear.
Black men are getting exterminated
And maybe my end is near.

We’re tired
We’ve been fighting this battle alone.
Some of y’all won’t acknowledge there is a problem
Others are saying it’s overblown.

As a people, we’re not asking for much,
All we want is justice.
Show us that y’all think our lives matter,
So we know it’s not just us.