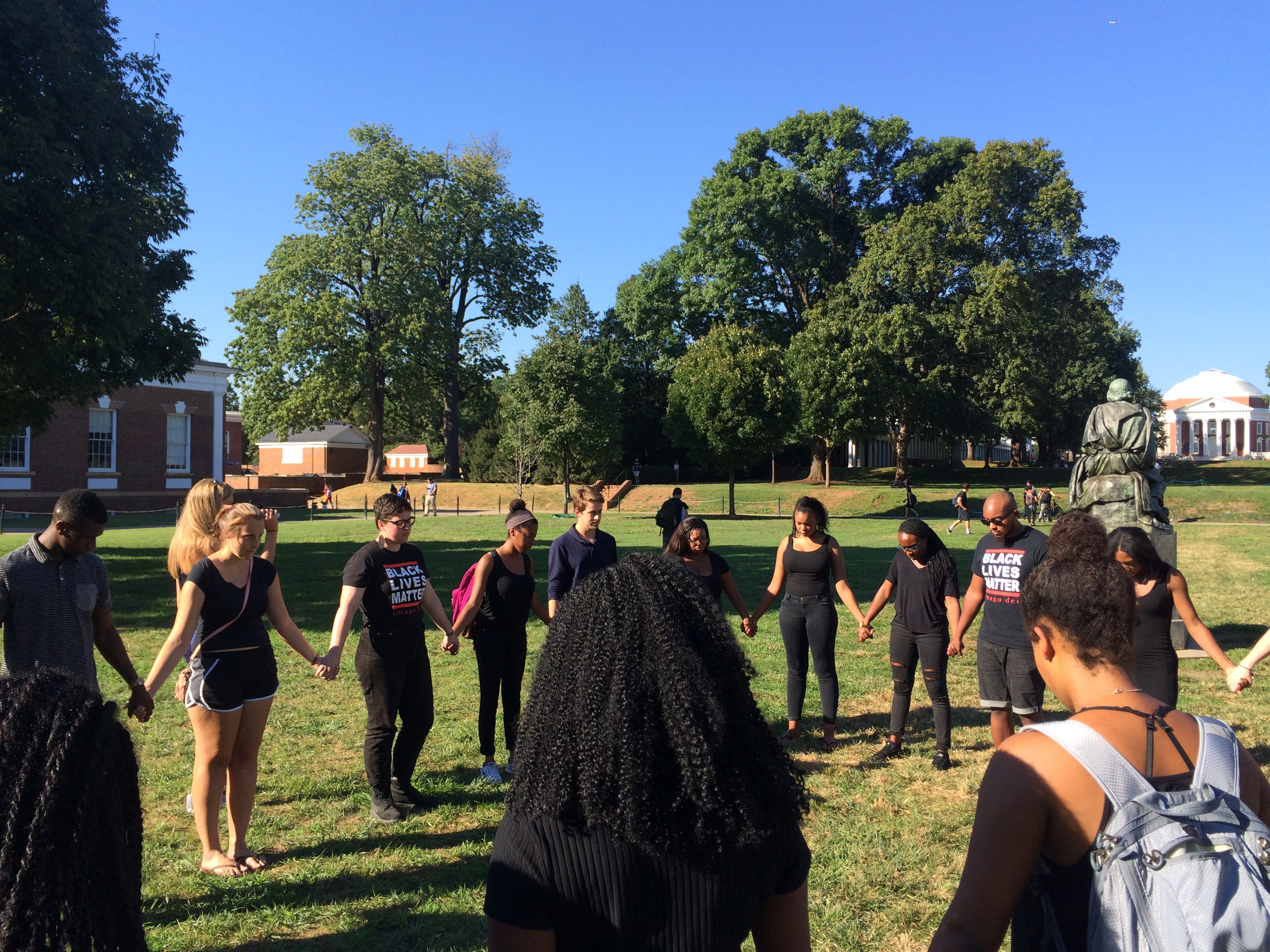 The Black Student Alliance called on students to wear all black and hosted a “die-in” in front of Old Cabell Hall this past Friday.  The peaceful protest was in light of the recent deaths of Terence Crutcher and Keith Lamont Scott as well as the lives that had been taken before them.

According to reports, Terence Crutcher was shot in Tulsa, Oklahoma on September 16th.  Keith Lamont Scott was shot in Charlotte, North Carolina on September 20th.  Officer Betty Shelby, who shot Crutcher, was booked into jail after turning herself in the Friday following the incident.  She was later released on a $50,000 bond.  Scott’s shooting is still under investigation.  Footage has been released of both events.

At the die-in, Black Student Alliance’s Political Action Advisor Weston Gobar invited everyone to “please use your voices or, lie down.”  Students then spread themselves across the sidewalk and stairs in front of Old Cabell Hall, lying down in silence.  Throughout the die-in students stood up to speak out on how the events have affected them, while the rest of the students snapped in agreement.  First-year student Alazar Aklilu is one of the people who stood up and spoke.

“What I was saying to everybody that was lying down is that it’s so important for you to be doing this,” Aklilu said.  “By just lying down on the floor you’re evoking change.  The people that pass by, they see you, that’s going to be in their head for the rest of the day, possibly the rest of the weekend.  So don’t feel like you aren’t doing anything, because you are.” 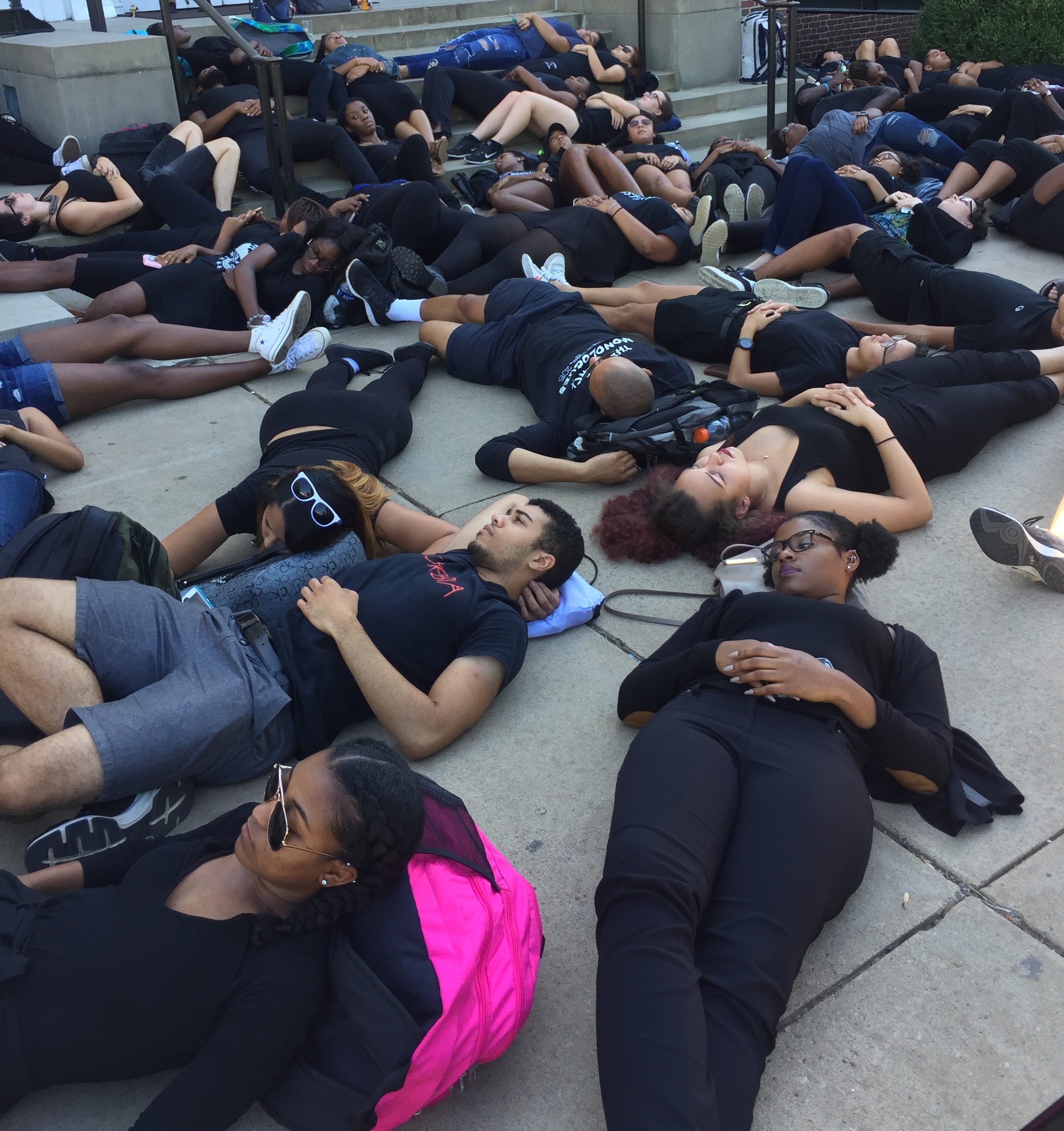 Aklilu sees the ongoing deaths by police officers as “a plague that won’t let up.”

When asked how he believes things can begin to change, he responded, “Giving different points of views to the people who might not understand.  Having open discussion.  I was talking to one of my white friends and he was saying ‘us white kids don’t talk about this stuff.’  I said why don’t you talk about this stuff?  Why don’t you feel the need to talk about what’s happening in the news.  When it happens to a gorilla you care, you make memes, you talk, but when it happens to an African American male you’re already desensitized to it.  You’re just like; oh there goes another hashtag.”

Dirron Allen, Assistant Dean of Students and Director of Student Activities, also came to the event, along with a couple other University faculty members.  He believes that change starts by getting locally involved.

“My opinion is that we often times think nationally about these issues, but I think if we think locally in our smaller areas we can probably manage it a little bit easier,” Dean Allen said.

However, Dean Allen also believes communication is important in order to evoke change.

“I think something else can be done, for people to just engage in conversations with others of difference.  How does this feel, what’s going on, help me understand why members of the community are struggling with this, and that takes a certain amount of humility for people to get out of their own privilege to engage in a conversation.  And it takes courage to do that.”

Weston Gobar organized the National Blackout along with Black student activists from other universities.  Vice Political Action Committee Chair Anelle Mensah  suggested the die-in.  The specific location of the event at Old Cabell Hall was also meant to send a message. 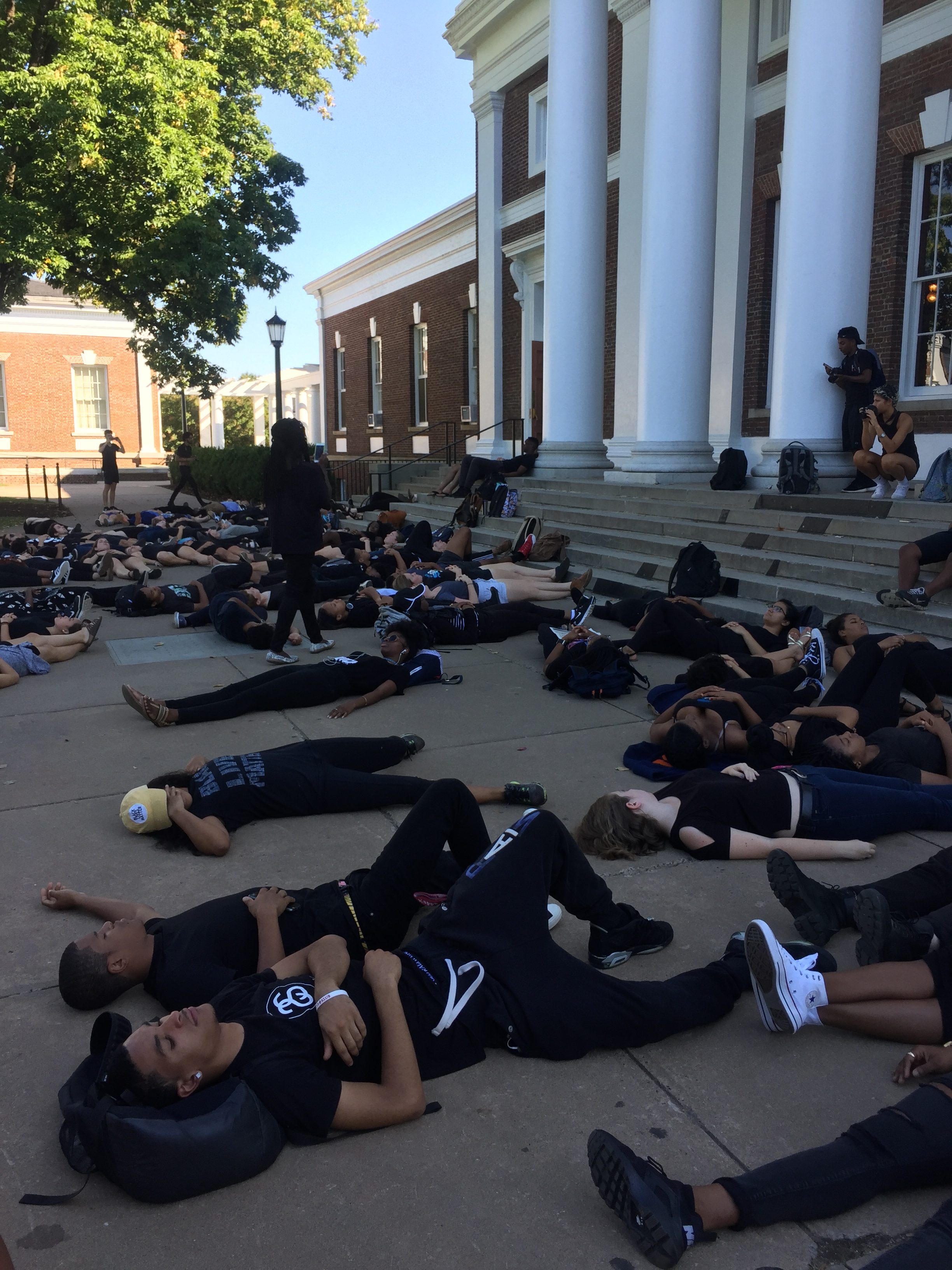 Gobar said, “I talked a bit in my last speech about this space, the history of the lawn, so I think this is important; [for] people [to] come to reclaim the space that was built by slaves, and for people to walk across as they’re coming, going throughout their day and seeing this visual representation of how many Black lives are being lost to police brutality.”

After the die-in, One-Way, an African-American Christian organization, held a large prayer circle to bring some closure to the event.