August 11th and 12th will forever be associated with college, the Ku Klux Klan, neo-Nazis, death, UVA. Those words commemorated my welcome to the University of Virginia, to Charlottesville as a first year; a place I am to call home, a place that became infested with the oppressors of my forefathers.

I recall sitting in the living room of my home, shielded away from the terror of the America that I’ve always watched on CNN, convinced that it was a narrative created to obtain audience. You could imagine the shock I experienced as I sat there watching the very lawn I walked the grounds of when I arrived for orientation only weeks back being desecrated by hate and prejudice. This site jolted me from the veil society blinded me with. Everything I’ve always understood and defended came crumbling right in front me. 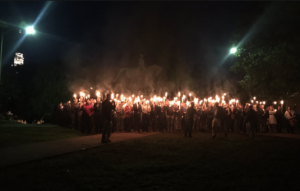 I began to question the systematic existence and acceptance of racism which allowed these people to march at this supposed “diverse and inclusive” institution and whether the Utopian idea of equality, of “all men are created equal” could ever be attained in a society where systematic oppression still occurs. I began to question my safety at a place where people could invade with lit torches and pitchforks, as though time was suddenly taken back to the medieval ways of evicting those that didn’t belong.

Most importantly, I began to question my decision to attend UVA. I questioned whether I would be a target of racial discrimination, a target of hate, of humiliation and indignity by my peers. I wondered whether they only saw me as a Black student that, presumably, only got accepted because of her athletic abilities and not because of her intellectual capabilities. I questioned why there was such a small percentage of Black students, of people like me, here at UVA.

I constantly glanced over my shoulders upon my arrival as if they were still there chanting “you will not replace us” and “take our country back.” As though I’ve been thrown into a war zone, my senses became heightened. Protests ensued and although I wanted to participate, fear of what could happen to me stopped me. This wasn’t the college experience I’d always dreamed about. I dreamed of college being the place where my political views would be cultivated, where I would truly find my identity, void of my parent’s influence. I imagined the first week being very lax and filled with social events that would allow me to meet new people and develop friendships that will last forever. Instead, I withdrew into a cycle of lectures, dining hall visits, and the comfort of my room.

As a first year, what I have learned from my brief time here on Grounds is that people will have differing opinions and that is fine. What isn’t acceptable are harmful actions that ensue because of the differing opinions. What isn’t acceptable is putting people in harm’s way and making them uncomfortable because their views do not align with your own. I’ve also learned to not allow the things that are happening around me have such grand effects on my college experience. My experience is still up to me to determine what it will be and I intend to make the best of it.