I asked a dean organizing the event what I should wear to a luncheon with Rev. Jesse Jackson. “Don’t worry, I won’t show up in a crop top and short shorts,” I said, laughing as he laughed. But there was no dress code, except to keep in mind that I would be attending a luncheon with him. So I settled for one of my better blouses, dark jeans, and sneakers. In the end, he arrived to the venue in his own blue and green athletic sneakers.

He was tall, with a presence that didn’t necessarily command attention but for those that knew him the surrounding faces lit up with recognition. I was sitting in the restaurant with six other students who had been waiting for him to arrive, and upon his arrival the anxious “I can’t believe we’re about to have lunch with Rev. Jesse Jackson” mood intensified. 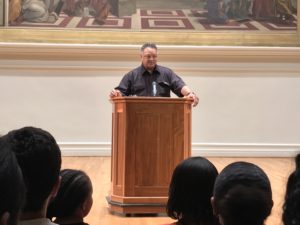 He wasted no time in approaching our table, having recognized it as ours probably by the crowd of Black students sitting with one another. He greeted each of us, holding out his hand to take it and meet us. We shook, we smiled, and with one girl who was eagerly talking to another Dean he placed his hands on her shoulders. Everyone laughed and I was immediately reminded of my uncle; he was the kind of man that wanted our interactions to be friendly and familial.

Although we had shifted our seats earlier to make room for him at the head of the long table, Rev. Jackson ended up sitting next to me. He leaned in from side to side to engage both sides of the table, making the infamous hand signs with the four Alpha men who had come as his hosts, and to us, the group of students who were lucky enough to be sitting at the same table as him. He had run for president in 1984 and 1988. He was chosen by Martin Luther King, Jr. himself to lead the SCLC. But he was also a man who preferred mayonnaise on his sandwich instead of lettuce.

My side of the table was quieter than the visitors who had come in with him, laughing as if he was an old friend instead of an esteemed civil rights leader. While we were excited, I suspect that his achievements, that we were chosen to meet a man of history and legacy, was daunting to say the least. Eventually Rev. Jackson leaned into our side of the table and asked our majors, our intentions. I told him I was majoring in Japanese and creative writing, and he gave me an ecstatic thumbs up. Ultimately, with the jokes he told and how he asked us questions, Rev. Jackson wanted us to remember that he was still, indeed, a man who wanted to meet and engage with young students.

“I wish we had somewhere to talk,” he mentioned several times, to which we all agreed. The restaurant was noisy, not painfully so, but loud enough for the true personal connection to be dimmed. Regardless of the space we were in, we were enthralled to have been the ones lucky enough to have lunch with him, to meet a man who carried on the messages and legacies of our Civil Rights forefathers.

My mother said that it was wonderful that I had the opportunity to meet with the revolutionaries, the intellectuals, who came before me, and the statement humbled me. I was a product of his and others’ efforts to create an equal world, to place Blackness in the same spotlight that whiteness alone stood under. It’s comforting to know that, even now, he still wants to meet with the younger generations, to ask them their goals and aspirations and provide inspiration for us.

It is true that there is something wonderful about meeting with those from previous generations, seeing a man who believed in the prosperity of Black youth. Thank you for believing in us.